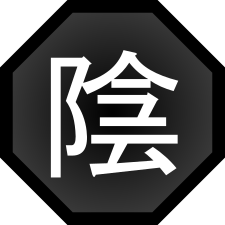 Yin Release (陰遁, Inton, Viz: Dark Style or Shadow Style) techniques, based on the spiritual energy that governs imagination, can be used to create form out of nothingness. When combined with Yang Release, it allows for the use of Yin–Yang Release.[1] Yin is depicted as black in the manga and red in the anime. The Six Paths Yin Power is represented by a crescent moon marking on the wielder's left palm.

Yin and Yang were first mentioned in name by Yamato during Naruto Uzumaki's nature transformation training.[2] During his battle with Tayuya, Shikamaru Nara noticed that her spirits consisted of much spiritual energy and little physical energy, and noted that she, like himself, made use of special chakra in battle. According to the Second Mizukage, genjutsu falls under the broad category of Yin Release. Being descendants of the Sage of Six Paths through his elder son, the Uchiha clan predominantly inherited his Yin Release.

Yin chakra is also part of the tailed beasts' chakra. During the Nine-Tails' attack on Konoha, Minato Namikaze used the Dead Demon Consuming Seal to seal the Yin half of the fox's chakra within himself.[3] After being reincarnated by Orochimaru, Minato was then able to use the Nine-Tails Chakra Mode.

Yin Release can be used offensively when combined with senjutsu.[4] However, it is unknown what exact role the Yin Release fulfils in said technique.

Retrieved from "https://roadtoninja.fandom.com/wiki/Yin_Release?oldid=1271"
Community content is available under CC-BY-SA unless otherwise noted.